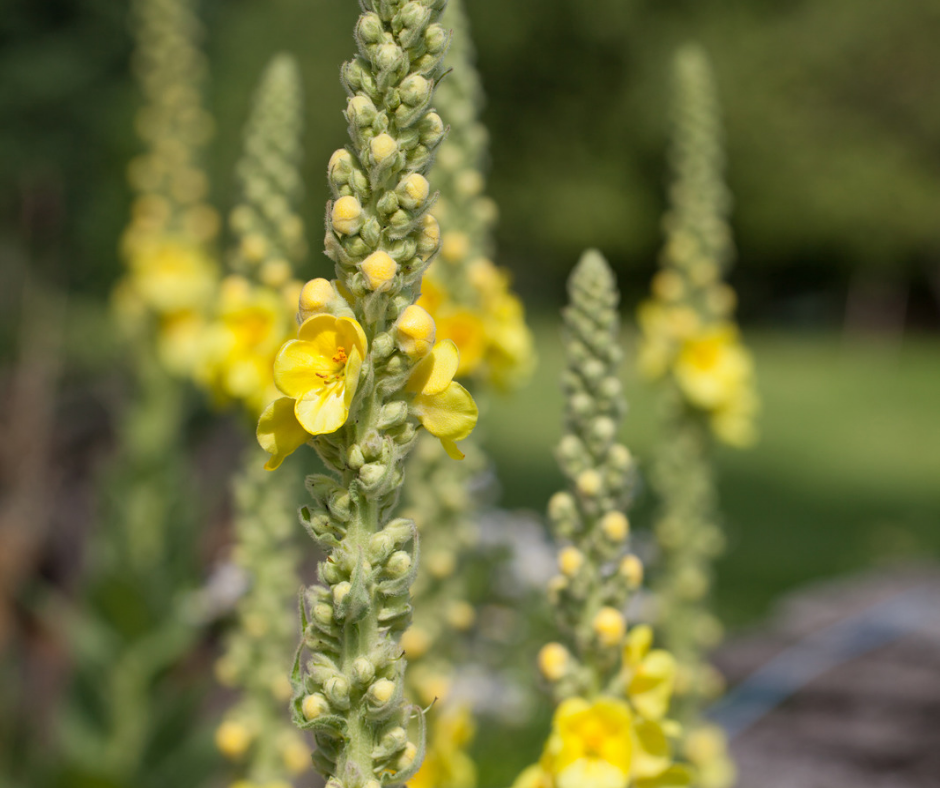 Verbascum thapsus, the great mullein, greater mullein or common mullein is a plant native to Europe, northern Africa, and Asia. Today, several species of mullein dominate landscapes throughout the Americas and Australia as well as their native range.

Mullein plants have assisted humans for thousands of years, not just as medicinal herbs, but as beneficial resources in many ways.

Ancient Romans coated the flowering stalks with tallow and used them as torches, while early American colonists used crushed mullein seeds as a fish poison. During the Renaissance, thick, soft leaves were used to line shoes, and when the leaves were rubbed against the face, it became a substitute for rouge.

It is thought that the Puritans brought mullein seeds to America for their medicinal herb gardens. By the late 1630s, mullein had escaped to neighboring fields and roadsides, and was quickly adopted by native American tribes.

Some medicine people would have their patient breathe in smoke from a fire that mullein had been thrown on. It was also thought to be effective when “smoked”, therefore, became a popular ingredient in pipe smoke mix.

Common mullein is tall (to 2.4 m (8 ft)) with a strong stem and few or no branches. Leaves are smaller toward the top, giving the whole plant a tapered appear-ance; leaves alternate and leaf bases continue down the stem, making the stem look four-winged or angled. The entire plant is woolly with soft hairs.

Mullein is biennial, reproducing by seed. During the first year, it produces a rosette up to 0.75 m (2.5 ft) diam; the stem follows in the succeeding growing season. Though mullein species are grown occasionally in flower gardens for the startling appearance of their long flowering spikes, their flowers tend to open one at a time or in small groups and are short-lived; this insures effective pollination by bees but gives a ragged appearance during flowering. Mullein also may produce spikes in unpredictable strange, twisted forms another detriment for dedicated gardeners.

1. Respiratory Support: Mullein is believed to combat respiratory ailments such as cold, cough, bronchitis, asthma, COPD, and relief from sore throat. The antibacterial properties of mullein may help treat inflammation and infection of the respiratory tract.

This reduces cough, helps with the clearance of mucus from the airways, and relieves irritation of mucous membranes. Its flowers and leaves are used for treating a wide range of respiratory ailments, such as chills and flu, tuberculosis, bronchitis, pneumonia, asthma, tonsillitis, and tracheitis. However, more scientific studies are needed to prove these claims.

2. Fight Viral Infections: Mullein possesses antiviral activity and may help fight certain viral infections. In one study, mullein extracts showed antiviral activity against influenza virus and another study conducted by the National University of Rio Cuarto, found that the methanolic extracts of mullein may fight against the pseudorabies virus.

3. Exhibits Antibacterial Properties: Mullein exhibits antibacterial properties. A study conducted by the Islamic Azad University found that the ethanolic extract of mullein has antimicrobial and antioxidant properties, which act against certain bacterial strains, including Bacillus cereus.

Another study conducted by the Jundishapur University of Medical Sciences found that aqueous-alcoholic extracts of mullein possess antibacterial effects.

4. Relieve Issues With Sleep: According to Olesya Wilson, “Mullein will not make you drowsy or sleepy, but the relief it provides to uncomfortable symptoms may allow you to sleep better.” Insomnia is a growing issue among men and women belonging to various age groups.

Experts believe that there are compounds in mullein roots, leaves and flowers that act as a natural sedative and helps induce sleep.

5. May Aid Tuberculosis Treatment: Several studies state mullein to be a potential treatment option for tuberculosis. This is due to its powerful and potent effects on the respiratory system. Historically, mullein was one of the main treatment options for TB, and was also said to be a treatment for skin disorders and leprosy.

7. Thyroid Issues: Anecdotal evidence suggests that intake of mullein tea may improve thyroid-related problems. This herb may help treat an overactive thyroid gland (a condition called hyperthyroidism). A formula created by a noted doctor had mullein as one of its constituents. This formula was specifically targeted to treat thyroid issues, however, research in this aspect is limited. We need more studies to substantiate the therapeutic effects of mullein tea for thyroid issues.

Ways to use Mullein

Although mullein is technically edible, it’s mostly used medicinally. The leaves and flowers can be harvested and dried for use in remedies.

Leaves can be harvested by hand at any time, preferably in the late spring or early summer when in bloom. For the largest crop, harvest leaves in the fall of the first year or the spring of the second year, because quality deteriorates after that.

Fresh mullein leaves are covered in tiny hairs that can irritate the throat, therefore most people use it in a dried form.

Harvest your leaves and flowers and dry in a warm room away from sunlight. Drying screens work well.

Store dried mullein in a glass jars, keeping in a cool, dark cabinet until needed.

Tea: Mullein tea has always been famous! The oldest known way to consume the benefits of this herb. Drink alone or add to a delicious herb tea mix!

Add your herbs to a cup or tea ball strainer and pour your boiling water over them. Steep 10 minutes, strain and enjoy!

Mullein tea can be consumed 3 times a day, and up to 6 during times of illness. To learn more about making herbal teas visit our blog post here.

Tincture: Tinctures are the most popular form of herbal medicine used today. This is due to the fact that they are quick, efficient and just as effective as a tea. Dried mullein is infused in alcohol for a time duration, which extracts the medicinal compounds from the herb into the liquid. If you’re interested in learning how to make your own tinctures, visit our blog post How to make a Tincture.

Salve: Mullein can easily be made into a salve for skin issues. Salves are easy to make and don’t require any special equipment. View How to make Herbal Salves and learn how!

Ear Oil: Mullein oil is a popular remedy for ear infections. Simply infuse 3- 4 tablespoons of dried mullein leaves and flowers, in 1/2 cup olive oil, using a double boiler, heating on extra low heat for 15- 20 minutes. Or, go the old fashion way; filling a mason jar full of dried mullein leaves, flowers and oil, and slowly infusing over a course of a few weeks.

Strain well, making sure not to leave any particles of herb in the oil. Fill an eyedropper full of oil and administer to the ear, rubbing the lobe as you do. Turn the patient over and administer a few drops in the other ear. This is important as infections will move from one year to another.

Repeat Every hour until the pain subsides.

Do not use on infections caused by water such as swimmer’s ear.

Mullein plant does not have any documented potential risks to humans. The few reactions that may occur in some users are not fatal. Studies do not show any side effects on pregnant women as well. However, anecdotal evidence suggests expectant mothers avoid prolonged use of any compound that contains mullein. Other potential adverse effects mullein may cause include the following:

Skin Irritation: Some individuals have reported skin irritation after using mullein extracts in tea and other forms. Avoiding the extract may cure the skin irritation in such people.

Breathing Issues: Mullein leaves are fluffy and hairy. If they get stuck in the throat, they may cause breathing issues. This usually happens when you make the tea and do not strain the mixture well. In some isolated cases, people taking the tea have reported difficulty inhaling and inflammation of their chest walls. However, medical intervention is not required in most instances.

As with most herbs, it is possible that they could interact with certain medications. If you are pregnant, nursing or taking medications, speak to your doctor before starting any herbal therapies. View our disclaimer here

The benefits of mullein go far beyond its delicious flavor, and history tells us that. Herbs with reputations such as mullein have been well earned. When you find this amazing medicine in the wild, view it from a different perspective, one of respect and gratitude.

Kayce is a Clinical Herbalist, Holistic Health Practitioner (HHP), Active Forager, Wild Food Chef and Mother of three. She has spent the last 18 years practicing herbalism and natural health, and spends most of her time educating others on the amazing potential the natural world can offer.